The Atomium is a building in Brussels originally constructed for Expo 58, the 1958 Brussels World’s Fair. Designed by the engineer André Waterkeyn and architects André and Jean Polak, it stands 102m (335 ft) tall. Its nine 18 m (60 ft) diameter stainless steel clad spheres are connected so that the whole forms the shape of a unit cell of an iron crystal magnified 165 billion times.

A seminal totem in the Brussels skyline. Neither EN tower, nor pyramid. Half-way between sculpture and architecture. A relict of the past with a determinedly futuristic look. The Atomium is the only symbol of its kind in the world. The Atomium was not intended to survive beyond the 1958 World Fair but its popularity and success soon made it a key landmark, first of Brussels, then countrywide and finally European.

Symbolic
The Atomium was the main pavilion and icon of the World Fair of Brussels (1958), commonly called Expo 58. It symbolised the democratic will to maintain peace among all the nations, faith in progress, both technical and scientific and, finally, an optimistic vision of the future of a modern, new, super-technological world for a better life for mankind.
Sizes
The peaceful use of atomic energy for scientific purposes embodied these themes particularly well and, so, that is what determined the shape of the edifice. At 102 metres high, with its nine interconnected spheres, it represents an elementary iron crystal enlarged 165 billion (thousand million) times. It was dreamed up by the engineer André Waterkeyn (1917-2005). The spheres, though, were fitted out by the architects André and Jean Polak.
1958 World Fair
The Atomium was not intended to survive beyond the 1958 World Fair but its popularity and success soon made it a key landmark, first of Brussels then internationally. Half a century later, the Atomium continues, for that matter, to embody those ideas of the future and universality. And, among other things through its cultural programming, it carries on the debate begun in 1958: What kind of future do we want for tomorrow? What does happiness depend on?
Restauration
Over and above the symbolic value linked to its history, the Atomium has become one of the icons of the city of Brussels: capital of Europe, with which it has a special relationship. Since its inspired restoration (2006), the landmark that many people call the most Belgian monument, is also a museum with its permanent collections and temporary exhibitions.
Future
The completely steel-clad Atomium is a kind of UFO in the cultural history of Humanity, a mirror turned simultaneously towards the past and the future, comparing our Utopias of yesterday with our dreams for tomorrow.
Previous
Next

includes a restaurant which has a panoramic view of Brussels. In 2013 CNN named it Europe’s most bizarre building.

In addition to the unique touristic and patrimonial experience of discovering the Atomium, we offer a continuous selection of exciting temporary exhibitions about art, design, architecture and society.

They enclose stairs, escalators and a lift (in the central, vertical tube) to allow access to the five habitable spheres which contain exhibit halls and other public spaces. 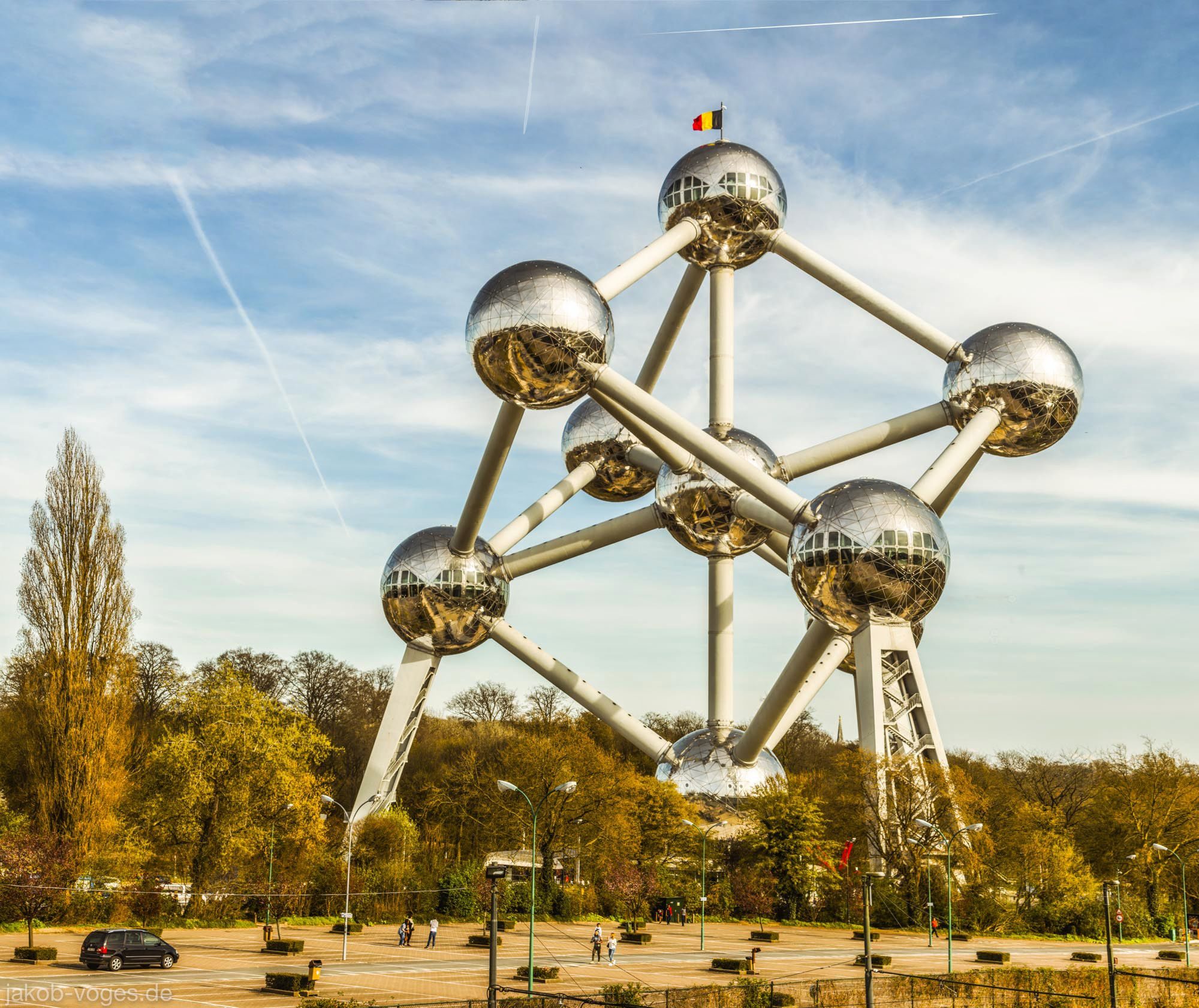 In addition to the unique touristic and patrimonial experience of discovering the Atomium. A continuous selection of exciting temporary exhibitions about art, design, architecture and society.
The Top Sphere: includes a restaurant which has a panoramic view of Brussels. In 2013 CNN named it Europe’s most bizarre building.
Technical Spheres: Three of the four top spheres lack vertical support and hence are not open to the public for safety reasons, although the sphere at the pinnacle is open to the public. The original design called for no supports; the structure was simply to rest on the spheres. Wind tunnel tests proved that the structure would have toppled in an 80 km/h wind (140 km/h winds have been recorded in Belgium). Support columns were added to achieve enough resistance against overturning.

In the 1950s, faith in scientific progress was great, and a structure depicting atoms was chosen to embody this. The Atomium depicts nine iron atoms in the shape of the body-centred cubic unit cell of an iron crystal, magnified 165 billion times. Though the Atomium depicts an iron unit cell, the balls were originally clad with aluminium. Following the 2004-2007 renovations, however, the aluminium was replaced with stainless steel, which is primarily iron. Likewise, while the subject of Atomium was chosen to depict the enthusiasm of the Atomic Age, iron is not and cannot be used as fuel in nuclear reactions.

The monumental RockGrowth, that for the first time appears in a colored version with reflecting ends, sits side by side to a Crater and a RockStone. This trilogy of sculptures tells a visual and emotional story about the evolution of my narrative: from the RockStoneBlast, that confronts us to an opaque mass, to the CraterRed that speaks of internal feelings and transparency, to the monumental RockGrowth, we walk towards an expansion with no limit. As an echo of the visual presence of the Atomium, this piece talks about development, growth, joy and energy. Arik Levy

The story of the Atomium is, above all, one of love, the love that the Belgians have for an extraordinary structure symbolising a frame of mind that wittily combines aesthetic daring with technical mastery. The appearance of the Atomium is unusual and unforgettable. It has a rare quality of lifting everyone’s spirits and firing their imagination.

© 2021 VOGES Photography.
Made with ♥ in Amsterdam